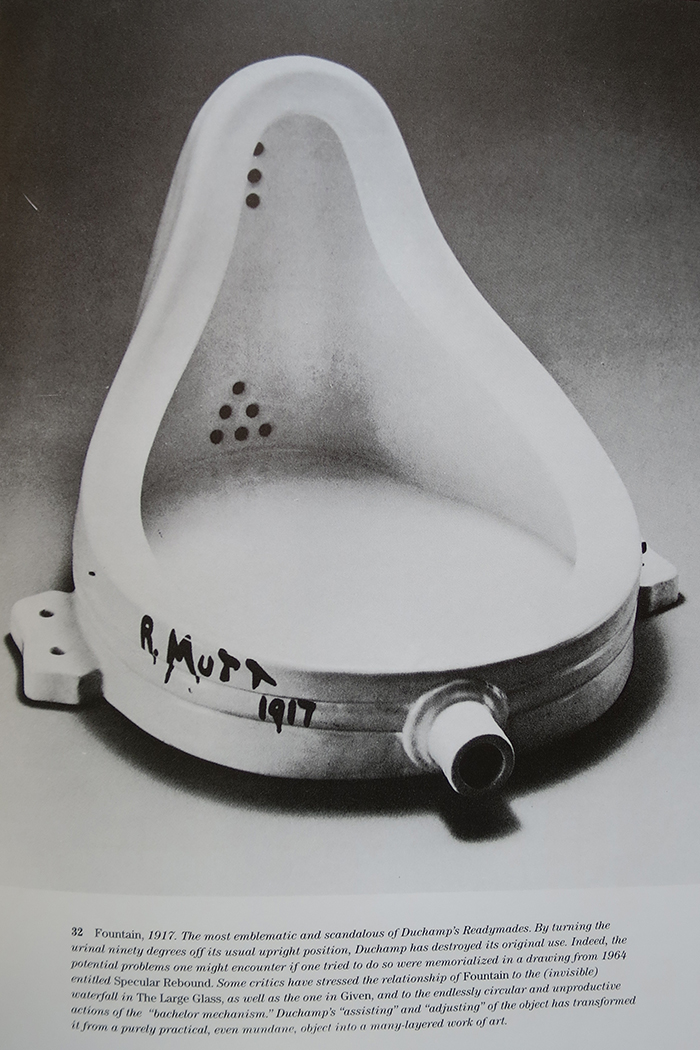 English version (Nederlandse versie hier) of article written by Louise Norton in 1917 about the urinoir signed by R. Mutt and – as now is known – is the artistic gesture of Elsa von Freytag-Loringhoven: Fountain. Here’s where I found the article. The reference there is: Buddha of the Bathroom, by Louise Norton, pdf from The Blind Man, No. 2 (1917) pp. 5-6. Reprinted by permission of the author. I place this article here to give Louise Norton some credit. She’s been ignored a lot.

I suppose monkeys hated to lose their tail. Necessary, useful and an ornament, monkey imagination could not stretch to a tailless existence (and frankly, do you see the biological beauty of our loss of them?), yet now that we are used to it, we get on pretty well without them. But evolution is not pleasing to the monkey race; ‘there is a death in every change’ and we monkeys do not love death as we should. We are like those philosophers whom Dante placed in his Inferno with their heads set the wrong way on their shoulders. We walk forward looking backward, each with more of his predecessors personality than his own. Our eyes are not ours.

The ideas that our ancestors have joined together let no man put asunder! In La Dissociation des Idees, Remy de Gourmont, quietly analytic, shows how sacred is the marriage of ideas. At least one charming thing about our human institution is that although a man marry he can never be onlya husband. Besides being a money-making device and the one man that one woman can sleep with in legal purity without sin he may even be as well some other woman’s very personification of her abstract idea. Sin, while to his employees he is nothing but their ‘Boss’, to his children only their ‘Father’, and to himself certainly something more complex.

But with objects and ideas it is different. Recently we have had a chance to observe their meticulous monogomy.

When the jurors of The Society of Independent Artists firmly rushed to remove the bit of sculpture called the Fountain sent in by Richard Mutt, because the object was irrevocably associated in their atavistic minds with a certain natural function of a secretive sort.

Yet to any ‘innocent’ eye how pleasant is its chaste simplicity of line and color! Someone said, ‘Like a lovely Buddha’; someone said, ‘Like the legs of the ladies by Cézanne’; but have they not, those ladies, in their long, round nudity always recalled to your mind the calm curves of decadent plumbers’ porcelains?

At least as a touchstone of Art how valuable it might have been! If it be true, as Gertrude Stein says, that pictures that are right stay right, consider, please, on one side of a work of art with excellent references from the Past, the Fountain, and on the other almost anyone of the majority of pictures now blushing along the miles of wall in the Grand Central Palace of ART. Do you see what I mean?

Like Mr. Mutt, many of us had quite an exhorbitant notion of the independence of the Independents. It was a sad surprise to learn of a Board of Censors sitting upon the ambiguous question, What is ART?

To those who say that Mr. Mutt’s exhibit may be Art, but is it the art of Mr. Mutt since a plumber made it? I reply simply that the Fountain was not made by a plumber but by the force of an imagination; and of imagination it has been said, ‘All men are shocked by it and some overthrown by it’. There are those of my intimate acquaintance who pretending to admit the imaginative vigor of Mr. Mutt and his porcelain, slyly quoted to me a story told by Montaigne in his Force of the Imagination of a man, whose Latin name I can by no means remember, who so studied the very ‘essence and motion of folly’ as to unsettle his initial judgment forevermore; so that through overmuch wisdom he became a fool. It is a pretty, but in defense of Mr. Mutt I must in justice point out that our merry Montaigne is a garrulous and gullible old man, neither safe nor scientific, who on the same subject seriously cites by way of illustration, how by the strength of het imagination, a white woman gave birth to a ‘black-a-moor’! So you see how he is good for nothing but quotation, M. Montaigne.

Then again, there are those who anxiously ask, ‘Is he serious or is he joking?’ Perhaps he is both! Is it not possible? In this connection I think it would be well to remember that the sense of the ridiculous as well as ‘the sense of the tragic increases and declines with sensuousness’. It puts it rather up to you. And there is among us today a spirit of ‘blague’ arising out of the artist’s bitter vision of an over-institutionalized world of stagnant statistics and antique axioms. With a frank creed of immutability the Chinese worshipped their ancestors and dignity took the place of understanding; but we who worship Progress, Speed and Efficiency are like a little dog chasing after his own wagging tail that has dazzled him. Our ancestor-worship is without grace and it is because of our conceited hypocrisy that artists are sometimes sad, and if there is a shade of bitter mockery in some of them it is only there because they know that the joyful spirit of their work is to this age a hidden treasure.

But pardon my praise for, sayeth Nietzsche, ‘In praise there is more obtrusiveness than in blame’; and so as not to seem officiously sincere or subtly serious, I shall write in above, with a perverse pen, a neutral title that will please none; and as did Remy de Gourmont, that gentle cynic end monkey without a tail, I, too, conclude with the most profound word in language and one in which cannot be argued – a pacific Perhaps! 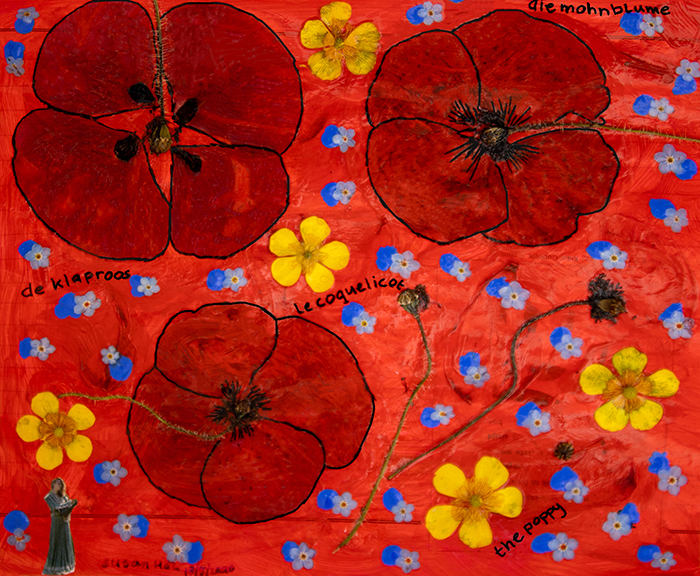 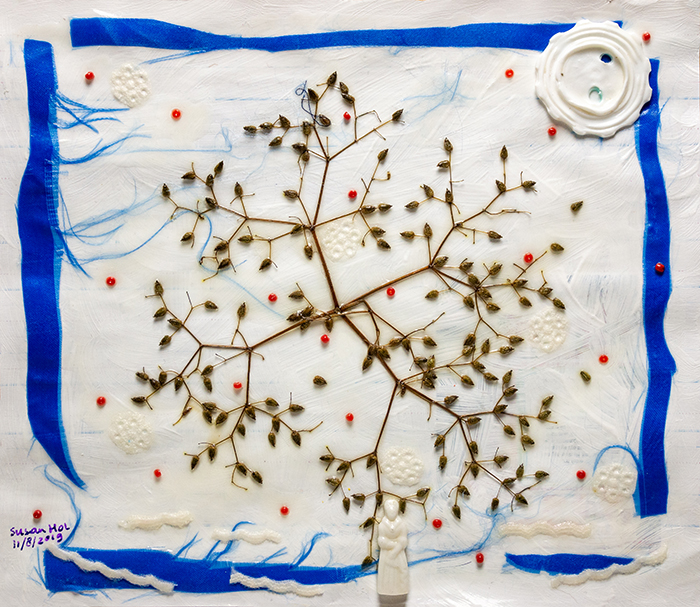 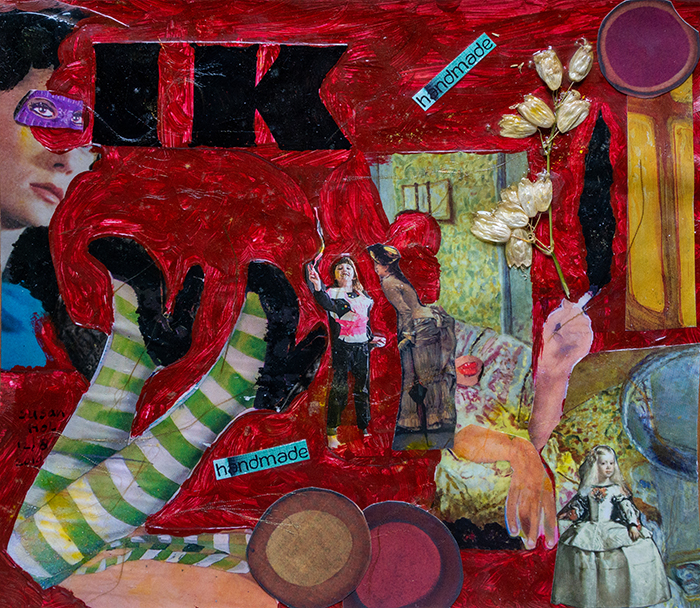 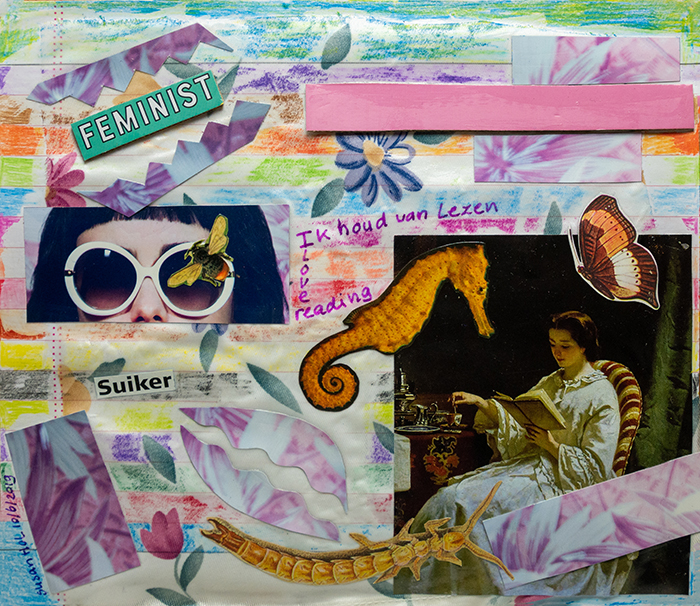 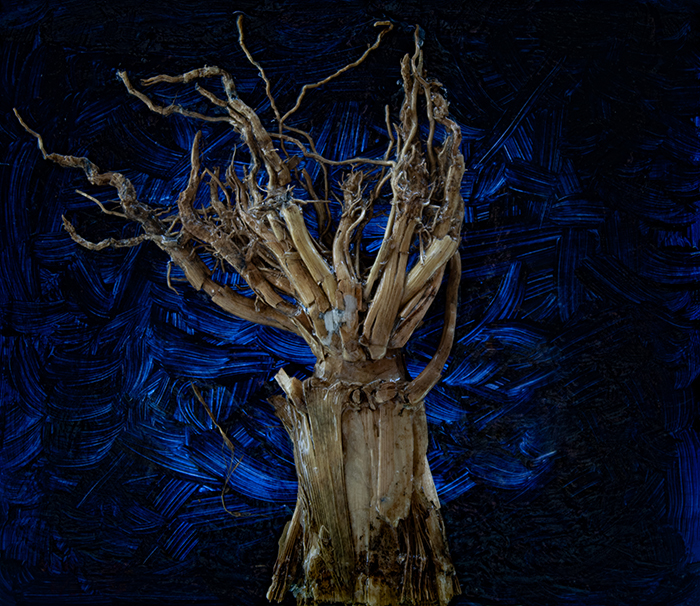 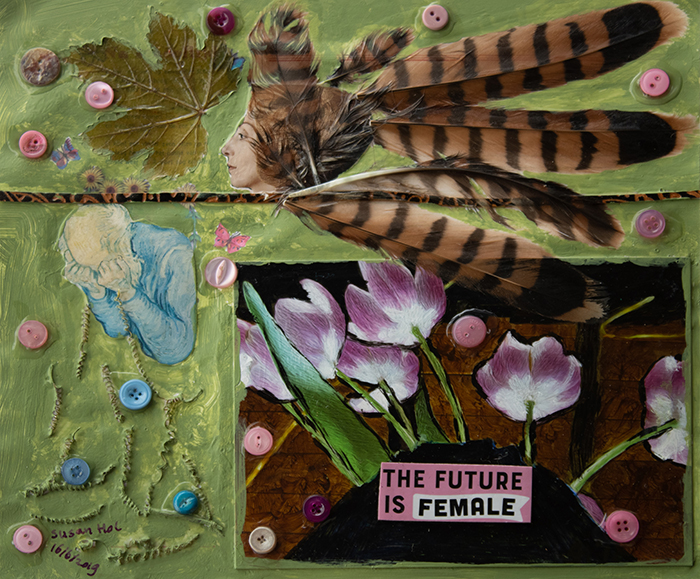 The future is female 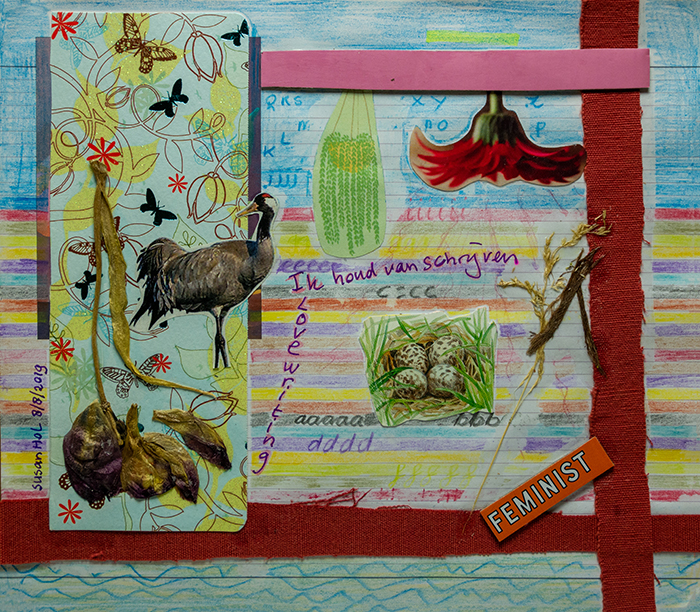 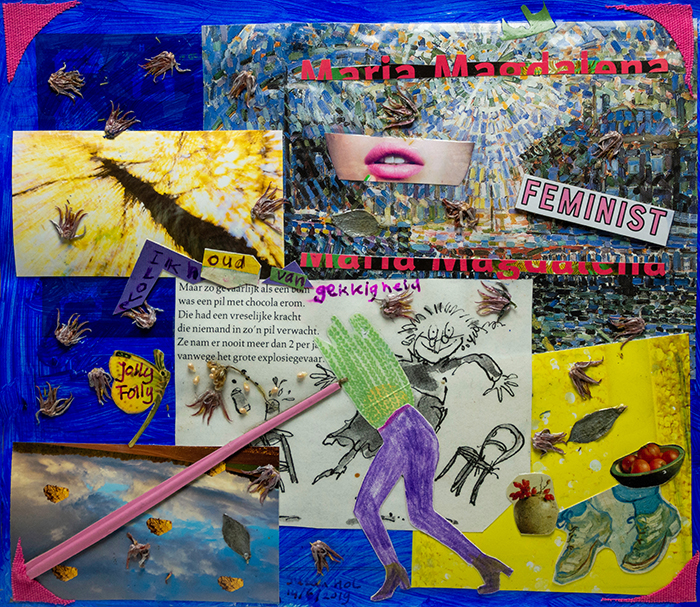 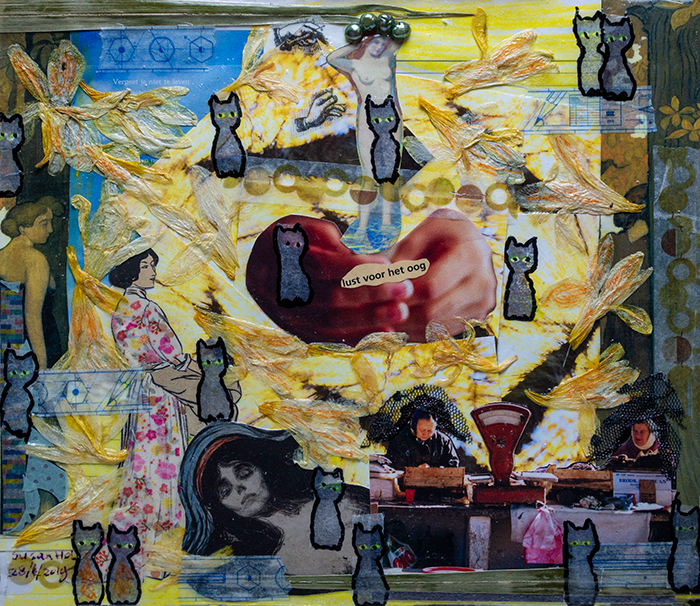 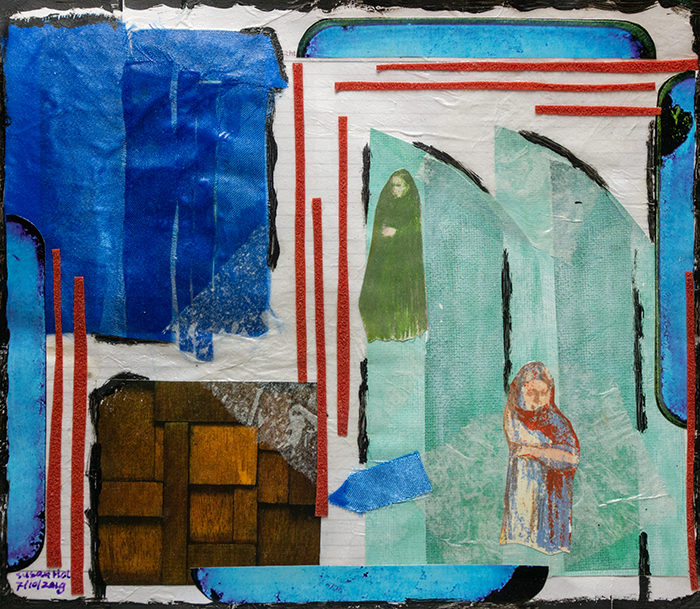 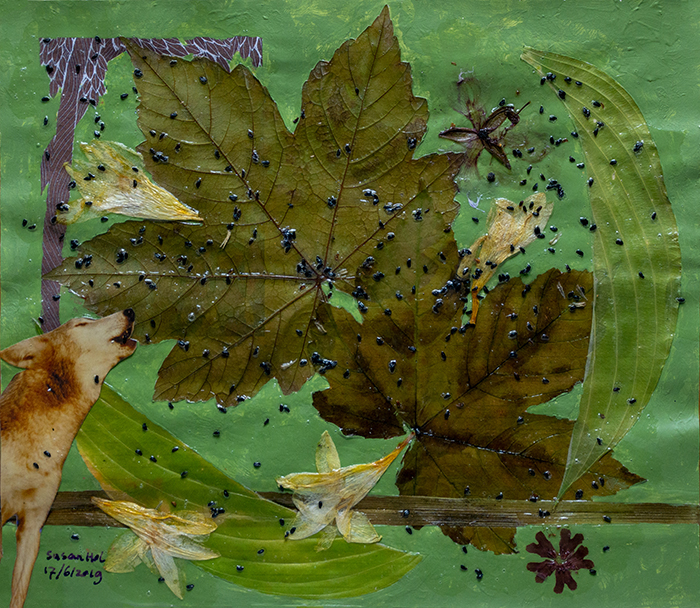